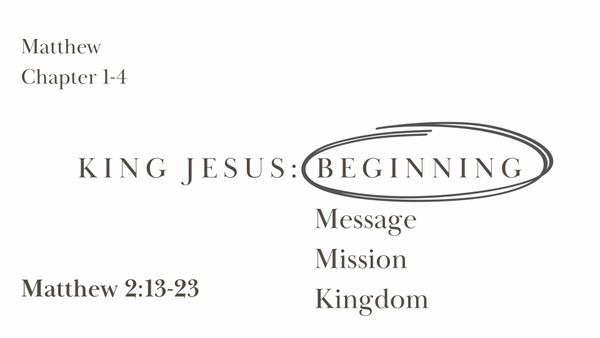 “After the wise men were gone, an angel of the Lord appeared to Joseph in a dream. “Get up! Flee to Egypt with the child and his mother,” the angel said. “Stay there until I tell you to return, because Herod is going to search for the child to kill him.” That night Joseph left for Egypt with the child and Mary, his mother, and they stayed there until Herod’s death. This fulfilled what the Lord had spoken through the prophet: “I called my Son out of Egypt.” Herod was furious when he realized that the wise men had outwitted him. He sent soldiers to kill all the boys in and around Bethlehem who were two years old and under, based on the wise men’s report of the star’s first appearance. Herod’s brutal action fulfilled what God had spoken through the prophet Jeremiah: “A cry was heard in Ramah— weeping and great mourning. Rachel weeps for her children, refusing to be comforted, for they are dead.” When Herod died, an angel of the Lord appeared in a dream to Joseph in Egypt. “Get up!” the angel said. “Take the child and his mother back to the land of Israel, because those who were trying to kill the child are dead.” So Joseph got up and returned to the land of Israel with Jesus and his mother. But when he learned that the new ruler of Judea was Herod’s son Archelaus, he was afraid to go there. Then, after being warned in a dream, he left for the region of Galilee. So the family went and lived in a town called Nazareth. This fulfilled what the prophets had said: “He will be called a Nazarene.”
‭‭Matthew‬ ‭2‬:‭13‬-‭23‬ ‭NLT‬‬

Because of Jesus, even in the detours, pain, and hidden seasons of life, I can always trst that God knows the way. 🗺 📍

This part of the text is the part of the Christmas story no one talks about. It's like the day after the big climax in all our favorite superhero movies. In the movies, our hero stops the bad guy, wins the day, and rides off into the sunset. The curtain falls and everyone cheers. However, have you ever wondered what happens next? In real life, we have to get up and go to work the next day. Life carries on. This text is all about next and, spoiler alert, it's not always pleasant... sometimes it is downright brutal. I am thankful for this. Life is sometimes brutal and I need to know what to do about it. We see Mary and Joseph shepherding baby Jesus through these first couple of years of life. Every sidetrack or detour helps fulfill a promise from God. It's good to know that, even when things seem to be going wrong, God is not lost and He has a promise for me in the middle of my mess.

Preface- We just left a great scene of the wise men finding Jesus and presenting Him with gifts. These gifts would have funded the story we are about to unfold. We can also see the symbolism of Jesus retracing the steps of the nation of Israel. He is born in the promised land, travels to Egypt to escape disaster, and returns to the land promised to Israel.

Old Testament quotation- Hosea 11:1, the whole book of Exodus.
Herod died- Probably around 2 BC. This would mean Jesus was not technically born in 0 BC, but probably around 4 BC.

It would have possibly taken a little time for Herod to realize he had been tricked. We can assume this was the time needed for Mary and Joseph to get baby Jesus on the road to Egypt.
Slaughter in Bethlehem- While babies dying too many, we must realize the scope of this tragedy. Some made this out to be thousands of babies. In actuality, the text specifically says the male children under two in Bethlehem. Scholars have estimated this number to be between 15 - 30 kids. Once again, any children are too many.
Old Testament reference- Jeremiah 31:5

Returning to Israel- It would appear in the text that, even though Joseph and Mary are from Nazareth, they are not immediately thinking of returning there. Perhaps they want to go back to Bethlehem or maybe even to Jerusalem. We simply are unsure of their plans. They are not important to the story.

Archelaus- This is one of three surviving sons of Herod. Herod divided his kingdom into three and gave Judea to Archelaus. He was a brutal king and only lasted 10 years. His exploits were as bad as his father and ended when a secret delegation of Jews went to Rome to ask for help. He was deposed and the area was turned into a province with governors ruling. This set the stage for the eventual succession of Pilate.

Nazareth- small northern town of approximately 500 residents. Despised by the Jews because of the people. There was a Roman outpost in the town and, therefore, the people were constantly impacted by Rome. They were more "world-wise" and likely unruly to the Sanhedrin in Jerusalem.

Old Testament- There is no mention of Nazareth in the OT. The reference is in Isaiah 11:1 and is from the same root word as 'branch.'

Even in our detours of life. 🚧

Have you ever felt like God has lost you? Maybe you Perhaps you were going through life and then something went wrong. Maybe a relationship suddenly went downhill, a job opportunity turned out to be a disaster, or your kids are in a rough place and dragging you along. There are so many things that can take life into difficult waters. God's Word never, ever promises us smooth sailing. There will be detours in life. However, there is a promise. In the detours, God goes with us. I think it is a wonderful thing that the promise fulfilled in the journey to Egypt is that "Out of Egypt, I called my son." This is a promise of identity. In my life, I have rarely learned much from my victories. I have learned the most in the struggles and difficulties. I didn't know my strengths until they were needed. God doesn't always cause the detours in life, but He can certainly use them for your benefit. The great news is, God hasn't lost you. He knows the way.

Even in the pain of life. 😖

This is a hard one. I have known many people who simply don't want to talk about hard times. Someone recently told me that we cannot talk about hard times because many of us haven't truly experienced any. I don't think that is true. I think "hard" is relative to people's experiences. They only matter if they are hard for you. Pain is a constant in life. Pain can be a good thing. It tells me when I have a hurt that needs healing. However, sometimes pain comes because of evil. It's even worse when evil comes to those who are innocent. I would not disrespect your experience by acting like pain and evil are not a big deal or we can simply say some quick, pithy response to make them all make sense. However, I would like to say that even in dark places, God is there. The great news is, God hasn't lost you... even in the dark. He knows the way.
Here is a link where I explore this topic further and there are links to my favorite apologist on this topic: https://www.brandoncannon.com/the-problem-of-evil-pain-and-sufferingt/

Even in the hidden seasons of life. 🫣

This is a deceptive one. When faced with the detours or failures of life and the evil and pain of life, some can almost feel embarrassed to complain. Some might say, "I'm not in a detour or in pain. I just feel... isolated and unseen. I don't want to complain. I am so blessed. I just thought there would be more than this." This idea of crying out in the woods with no one to hear is terrible. There are people all around us who feel they are crying out in the dark and no one cares. The great news is, God hasn't lost you. He knows the way. I don't know where you are in life but I do know that God has you right where you are for a reason. Don't give up or give in. You are probably closer to a better day than you realize. Even if you will still be in your season a while longer, God will stay there with you. He is not in a hurry and will not abandon you.

Thank goodness that, even when I don't, Jesus knows the way.