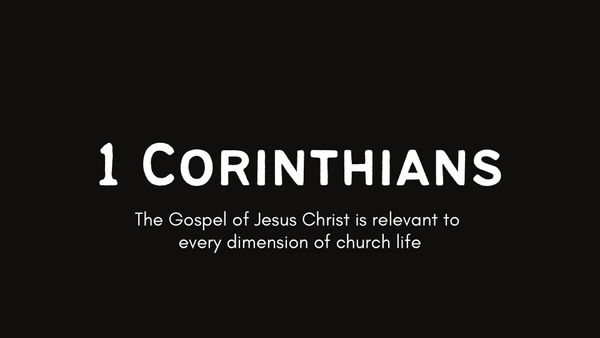 Have you ever heard the phrase, "Whatever happens in Vegas stays in Vegas?" It's a phrase given to people who go to America's "sin city," Las Vegas. Whatever you want to do can be found in Las Vegas. It has also been called "America's playground." Sin, vices, and excess can all be found for the right price. Well, the city of Corinth was the first-century Roman Las Vegas. As a port city, it was seen as the place to go play and experiment with excess. Perhaps knowing this can help you sympathize with Paul and his sometimes harsh tone when writing to this unruly church. It seems as though God allowed the two letters to the church in Corinth to survive because they help us see what chaos looks like. Even in the midst of chaos, God's grace continues to reign. This letter is actually one of four letters sent by Paul to the church in Corinth. Only two have survived and been anointed by God to be in the Bible. Both of these letters seem to be responses to questions sent to Paul. Therefore, it is important to understand the church Paul is writing to so we can get the most out of the letter.

Who wrote it: The Apostle Paul
Martyred: Killed by Nero between 62 and 64 A.D. He beheaded. There were many more gruesome ways to die so this was considered a merciful death for a Roman citizen.

Who was the original audience: Church in Corinth. Extremely carnal, gentile church. The "Las Vegas" of the first century.

Where are we: Paul is likely writing from the city of Ephesus just before leaving for Macedonia.

What is the big idea: Reports have come to Paul concerning the church he planted. There are extreme divisions, quarreling, sexual immorality, lawsuits among believers, and so much more happening in the Body of Christ. Paul is trying to lay out what to do, how to live together in unity, how to worship together, and generally bring order from chaos.

Why is this book important: Paul doesn't mess around. He calls out sin, and division, and talks about the issues impacting the local church. Rather than turning a blind eye, he moves forward and hits the issues head-on. This is important not only to hear what to do but the importance to not sweep things under the rug. It can be difficult to bring up difficult topics, but sometimes the most loving thing we can do is enter into conflict for the sake of healing.

How can I apply it?: There were many negative influences coming against the church in Corinth. Paul is helping them discover the foundational pieces that should point out sin and unify the church. This is by having an honest look at what's going on, exposing sin, and moving forward. Have the courage to look honestly at the things going on and what it will take to walk in freedom. Also, Paul lays out what spiritual gifts look like in the church. We should seek to be used in spiritual gifts often so we can be a blessing by serving others.

Chapter 1: The city of Corinth was a port city and thought of as the Las Vegas of the Roman Empire. You could have said, "Whatever happens in Corinth, stays in Corinth." Because of this, the church has a lot to deal with. This letter is the first of 4 letters Paul wrote to this church. Only two were inspired and ended up in our Bible. This appears to be the church that, above all the rest, needed a sign labeled "extra grace required."

Chapter 2: Verse 8- Such an intriguing thought. The Bible says that if the rulers of this age (most likely speaking of demonic forces) had of known the plan of God, they would have not Crucified Jesus. God kept His secret hidden and only spoke in riddles and prophecy to prepare His people but not tip off the devil. Something to think about.

Chapter 3: This chapter speaks about divisions in the church. We must remember that, without effort, any group of people will drift toward disunity. We must fight to maintain unity and it starts with ourselves. We choose to forgive and read God's Word so we know the truth and what we stand on.

Chapter 4: Verses 15-16: Paul says they do not have many mature Christians they can look at as spiritual mentors. Therefore he tells them to follow his lead. That is powerful. Think about it. Are you living for God in such a way that you would allow others to be lead by your life? Perhaps Jesus wants us all to take a step toward maturity for the sake of the next generation.

Chapter 6: Paul spends the second half of this chapter talking about the need to "flee" immorality. While our culture is more steeped in sexuality than ever, many people say the church should not talk about it. However, God's Word reveals where the dangers are and what to do. God's Word says, "Flee." That's a fancy way of saying, "Run, Run, Run!"

Chapter 7: Unfortunately, many in the church world (myself included) use to push for people to get married. However, this chapter speaks about the blessing of singleness. As a Christian community, we should be willing to accept single people not as a "work in progress," but just fine the way they are. Actually, Paul indicates they have some advantages. This does not mean we get divorced to know God more. God's Word is providing common sense wisdom to our daily lives.

Chapter 8: Verse 1- Paul is talking about how the Christians know that the pagan practices are to worshiping false gods. Therefore, there is no power. A word of prayer can sanctify the food. What I really love, though, is where Paul says the difference between knowledge and love. Knowledge only leads to pride. Knowledge plus love leads to helping others and "building them up."

Chapter 9: This is an amazing chapter as Paul says he is free to do what he likes yet gives everything to Christ. This reminds us that serving Christ is true freedom. It is such freedom that we gladly lay it down at the feet of Jesus and say, "Put me in, coach! I want to share this freedom with everyone else."

Chapter 10: Beginning at verse 23, God's Word helps us see that we do not live to please ourselves. We have been set free from the need to prove ourselves. Therefore, we can live and serve for the glory of God. Everything we do can be an act of worship if i is directed toward Him.

Chapter 11: Paul speaks about head coverings because shaved heads were part of paganistic prostitution temples. Paul is saying those who had previously been involved in such practices that you are no longer defined by that lifestyle. You can regain your modesty and wholeness. Also, do not use worldly practices to worship God.

Chapter 12: One of the most controversial chapters in the New Testament. Paul speaks about brining order and defining the gifts the Holy Spirit gives for the church to edify each other because we so often get out of balance. There is no place to say these gifts have stopped so they can still be used by the church today. However, just like then, the gifts never bring attention to the person but always glory to God.

Chapter 13: Amazing look at what true love is.

Chapter 14: Paul talks through how the gifts of the Spirit can and should be used in a local gathering of the church.

Chapter 15: Verses 3-7: Scholars believe was an early Creed Paul is reciting. It probably went back all the way to days after Jesus was raised from the dead. This is important because in the first couple of years before the Gospel accounts were written, they passed on the good news through repeatable phrases so people could remember the hope they have. It's beautiful to think this may have been a mantra being repeated by early Christian martyrs while walking to their deaths.

Chapter 16: Pauls speaks about a "collection" for another church. Following Jesus was not only for the poor but people would also loose their jobs because they now identify with as Christians. Therefore, Paul would raise money for them from other cities. Paul ends with saying he was writing final greeting with his own hand. Many would have people write out what they were saying and they would then sign to prove it was authentic.