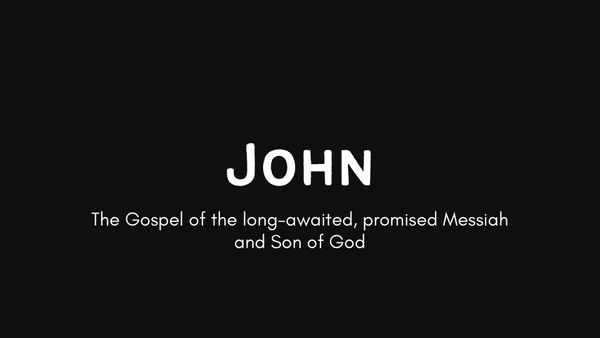 John was the best friend to Jesus and the one who cared for Mary, the mother of Jesus, after Jesus ascended to Heaven. This would give him a unique perspective. The other thing to realize is the Gospel of John was written several years after the first three Gospels. The Gospel of John was not intended to be a blow-by-blow account of Jesus' life. It was intended to remind the church who Jesus is and what He claimed. It focuses on the 7 "I Am" statements of Jesus. It is also important to notice the first few verses of this Gospel. John is putting to rest any Gnosticism in the early church by confirming Jesus is God. He did not become God. He existed from the beginning.

Who wrote it: John, the Apostle
Martyred: John is the only one of the original 12 disciples to have reportedly died of old age.

Who is the original audience: The early church. Probably primarily to the 7 churches he was an overseer of in Revelation 2 and 3. Also to the wider world.

Where are we: Polycarp, a disciple of John, told Irenaeus John wrote his Gospel during his time of serving in Ephesus.

When was it written: Due to various factors, it is believed John wrote his gospel between 85 and 95 A.D.

What is the big idea: The big idea was to focus on the teachings and proclamation of Jesus as the "I AM." Jesus constantly said things like, "I am the door."  The first part, "I am" is part of the Divine name of God. Every time He would say things like this, He would have made his Jewish detractors furious.

Why is this book important:
The Gospel of John is thought to have focused on the final year of Jesus' ministry. We get the privilege of sitting at His feet at the height of His ministry. Possibly the most important verses in the entire New Testament is John 1:1-3. Jesus is God. It paints the highest Christology possible.

How can I apply it?: Jesus is exclusive. He does not share His glory with another and there is only one way to Heaven. In our modern culture, it is considered rude or narrow-minded to claim all other religions are wrong. This doesn't mean there are not things that other religions don't get right. However, they are only right in part. The only way to Heaven is Jesus. There is no other way. To be a true Christ-follower, you have to be willing to accept this and follow Jesus. This is the question you must answer: Is Jesus Lord of All?

Chapter 1: The first chapter, John speaks of Jesus as the "Word." Therefore, read the fist verses placing the name "Jesus" for the "Word."

Chapter 3: Jesus is talking to Nicodemus. Nic was one of the smartest people in the nation. He was part of the Sanhedrin. This would have made him powerful and influential. Probably why they met at night away from the crowds.

Chapter 4: The Samaritans and Jews were enemies for hundreds of years. Jesus reaching out to this village would have been scandalous to the jewish reader. Notice the whole village becomes believers in Jesus.

Chapter 5: The first part of this chapter finds Jesus talking with a man in need of healing. He was in a place where legend said an angel would come down a disturb the water of the pool. The first person in would allegedly be healed. There is no evidence this is true but that is why so many sick were in this certain place.

Chapter 6: Towards the end of this chapter is why some groups once confused Christians of being cannibals. Jesus says to "eat His flesh and drink His blood." Obviously, just a casual reading informs us Jesus does not mean this literally. Throughout the Gospel of John, Jesus uses various metaphors to teach us about who He is.

Chapter 7: John 7:31- It was thought when the Messiah appeared He would have the ability to perform miracles, especially bring freedom to the demon possessed. The crowd was saying Jesus was fulfilling this prophecy.

Chapter 8: John 8:58- The reason the Jews became so irate about Jesus saying He was "I am" is because this how God in the Old Testament revealed Himself to Moses. He was revealing He was God.

Chapter 9: The reason the blind man's parents were afraid to stand up for him was because being "thrown out of the synagogue" meant becoming a social outcast. The modern equivalent of being "cancelled" today. In the honor/shame culture of the time, this would have been devastating.

Chapter 10: There are some critics of the Bible who say Jesus never claimed to be God. Today's reading completely dismantles this claim. Jesus is almost killed for claiming to be God when He says, "I and the Father (God) are One." You can tell his opponents knew what He meant because the method of death would have been stoning. This was the typical punishment for blasphemy.

Chapter 11: Most scholars believe the reason Jesus may have waited until after Lazarus had been dead for 4 days is because of a current legend. It stated after death the spirit of a person would linger for 3 days. This is, of course, not true. Jesus waited until after then to prove He is God and it not allow some local superstition to confuse the hearts of people.

Chapter 12: Riding into Jerusalem on a donkey was Jesus' most overt claim to be the Messiah. Old Testament prophecy said the King would ride into Jerusalem declaring his humility by riding on a donkey. This is why his enemies were so bothered.

Chapter 13: There was been a long debate as to whether or not Christians should wash each other's feet because of this chapter. Jesus not instituting this as an act of worship in the same way as communion. He is giving us an example of serving others. This doesn't mean washing someone else's feet is a bad thing. It means what is even better is serving others.

Chapter 14: When reading today's text, do so with the rising music in your head from a movie where the tension is building. At this point, Judas has gone to betray Jesus. Jesus knows this and is not wasting a single moment.

Chapter 15: In this chapter, Jesus is continuing to talk with His disciples as they walk from the dinner hall to the garden where He would be betrayed. He spends the first half of the chapter talking about the relationship we should have with Him and comparing it to a vineyard. He probably uses this analogy because they likely would have passed a vineyard on the way to the garden.

Chapter 16: Jesus is talking with them as they walk to the Garden. Their hearts are doubtlessly getting heavier. This is why Jesus talks about their sorrow turning to joy.

Chapter 17: This chapter is sometimes called the "high priestly prayer." In the Old Testament, the high priest would go into the temple and intercede for the people. This chapter is Jesus praying for all creation.

Chapter 18: The reason John was able to get closer to record more of what happened is because some scholars think John (the write of the Gospel) may have had family ties with the priesthood. He would have been allowed to be in the home where Jesus was placed on trial.

Chapter 19: Notice how Jesus stays pretty much silent until Pilate challenges who is in charge. Pilate tells Jesus he has the power to execute Jesus or let Him go. It's at this point where Jesus says, "Nope. Don't get confused. All your power comes from God.

Chapter 20: Why did Mary not immediately notice Jesus? Some have suspected it was because of the disfiguration of Jesus in Crucifixion. This is possible but it is also possible that Jesus was merely hidden from them with a cloak or point of view. Either way, the point of the encounter is Jesus had an unmistakable voice. He said her name and Mary instantly knew it was Jesus. He still speaks to us today.

Chapter 21: Verse 18- this verse is a prophecy of how Peter would ultimately die. He would be executed for his believe in Jesus being God. According to history, as they were preparing to crucify him, Peter asks if he would be executed upside down because, "he was unworthy to die in the same manner as his Savior." Later his brother, Andrew, was also crucified but on an X-shaped cross.