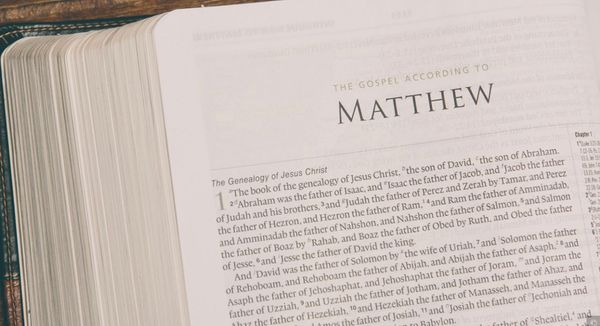 This is an amazing way to begin a thoroughly jewish gospel. To the jewish mind, family hertiage was a really big deal. This is how they knew who could be counted as part of their culture, how they discerned who could own land, who could serve as priests, and who could claim the right to rule. What Matthew is doing here is coming right out of the gate with controversy and boldness. The jewish reader would see this not as a soft opening to a long letter but as a declaration. Matthew is claiming the connection to Abraham and the connection to Kingship all within the first few words. Matthew is also claiming that Jesus starts everything anew. He uses a specific word that the NLT translates as "a record of the ancestors." The Greek word for this is the same as the Greek word for the first book of the Bible, Genesis. Matthew is specifically saying, "This is the fulfillment of it all and a new beginning."  By stating Jesus' credentials, Matthew is waving a flag in the face of all jewish people  and setting the tone for the entire book. He is literally saying, "Jesus is the King and I intend to prove it."

Why did Matthew indicate the divisions of 14 between Abraham, David, and Jesus?
Answer: First of all, Matthew was a tax collector. God uses the way He makes us to deliver His message. This is a wonderful example of this. It's probably no doubt that the mathematical mind of Matthew couldn't help but make these connections. Also, genealogies were meant to be memorized and recited. This was most like only one of many pneumonic devices to help Matthew remember. He is also encouraging his readers to memorize them as well. This is the King's heritage.

Why are there two different genealogies in the Bible?
Answer: There is one in Matthew and one in Luke. This cannot be ignored because there the names are different in places. Either there is a glaring contradiction or there is something purposeful happening here. Quite simply... they are different because they are for two different purposes and from two different parents. Matthew is tracing the legal right to rule through Joseph, Jesus' adoptive father. Luke is tracing Jesus' Earthly bloodline lineage through Mary, his mother. Mary's name is not mentioned in Luke possibly because that was the primary way it was done in the first century in gentile circles. Since Luke is a gentile and is primarily writing for gentiles, he is not concerned with the jewish line of kings.

Why does Matthew switch up the wording at the end? Everyone else is listed from father to son until Joseph. He is listed as the "husband of Mary."
Answer: Matthew is reminding the reader that Joseph's part in this lineage is because of his connection with Mary. He is not the father of Jesus. He adopted Jesus and raised him as his son. We discover this in the next sections.

Anything Interesting to Note?
Answer: Always.

What's in a name?

In Jewish culture, names carried a lot of weight. Many times they were chosen for their meaning as a hopeful prophecy over the child and their generation. We know  the names of those in the story of God were chosen purposefully, but it is possible there was more going on than even they knew? Possibly. If you take the names in the lineage of Jesus, you can actually tell the story of the Gospel. You can do this all the way to Adam. As an example, here is a list of names only from the Babylonian Exile to Jesus. (You can do this with the rest as well.)

Jehoiachin- May the Lord establish, authorize
Shealtiel- I have asked of God
Zerubbabel- to be scattered to Bablyon
Abiud- Father of Praise
Eliakim- God will establish
Azor- Helper
Zadok- Just, Righteous
Akim- established by God, raised up by God
Eliud- God is my praise, God is Great
Eleazar- God is my help
Matthan- Gift or Hope of the Lord
Jacob- supplanted, overthrow
Joseph- God will give or God will add
Mary- Beloved
Jesus- to rescue, the Lord is salvation

If you put all the together, they tell an amazing prophecy:
The Lord will grant (authorize)… Our request to return from… Being scattered to Babylon. The Father of Praise… Will send… A Helper… Who is Sinless… He will Be Raised Up… He is our Great God… He is our Helper… He is our Hope… He will overthrow sin… He will give… His beloved… Salvation.

WOW! 🤯🤯🤯
That's amazing! Everyone in the genealogy has a part to play in the story of God's family!

It is important for Matthew to make sure the reader understands Jesus has the right to jewish heritage and the throne. Therefore, he makes the connection that Jesus is in the line of Abraham. This means He will be the fulfillment of the promise to Abraham that all the world would be blessed through his descendants. Jesus is also connected to David because this gives Him the legal right to rule. Therefore, all the recognizable names are highlighted to establish Jesus kingship.

Matthew does something interesting. At first glance, there is no reason for him to include the 4 women in his genealogy: Tamar, Rahab, Ruth, and Bathsheba. It would have seemed irregular, scandalous, and counterintuitive. Yet, he does anyway. Here are three possible reasons why:

Most of the names in the genealogy of Jesus are unknown to the modern reader. They did not "make a splash" in the Old Testament so we can be forgiven for not remembering them. However, without each of these names, the story of Jesus would be different. Jesus does not only call the prominent or the infamous. He has a place for us all.

Jesus is not impressed by the famous nor offended by the infamous. Jesus has given us all a chance to be in the story of the family of God.