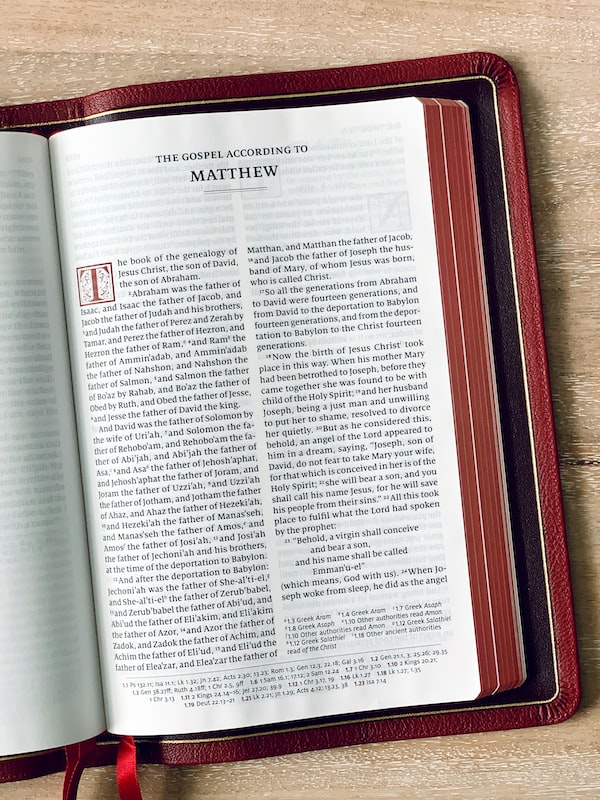 What kind of person does God use to bring about His good plans? Let's find out.

This is how Jesus the Messiah was born. His mother, Mary, was engaged to be married to Joseph. But before the marriage took place, while she was still a virgin, she became pregnant through the power of the Holy Spirit. Joseph, to whom she was engaged, was a righteous man and did not want to disgrace her publicly, so he decided to break the engagement quietly. As he considered this, an angel of the Lord appeared to him in a dream. “Joseph, son of David,” the angel said, “do not be afraid to take Mary as your wife. For the child within her was conceived by the Holy Spirit. And she will have a son, and you are to name him Jesus, for he will save his people from their sins.” All of this occurred to fulfill the Lord’s message through his prophet: “Look! The virgin will conceive a child! She will give birth to a son, and they will call him Immanuel, which means ‘God is with us.’” When Joseph woke up, he did as the angel of the Lord commanded and took Mary as his wife. But he did not have sexual relations with her until her son was born. And Joseph named him Jesus.
Matthew‬ ‭1:18-25‬

Because of jesus, we can be a part of God’s plan. Can you imagine thinking you have your whole life ahead of you and then one conversation changes everything? Perhaps you can. It is amazing how quickly life can change. Joseph probably thought he had his entire life ahead of him and then... everything changed. 😩However, God was in this plan. Maybe you feel like this doesn’t work for you because your conversation had nothing to do with an immaculate conception. It had more to do with someone doing something you didn’t prefer. Perhaps your life has recently changed because of good news. 🎉 Perhaps it was the worst kind of news. 😭 The Gospel of Luke records what happened to Mary and how she responded. Matthew focuses on Joseph. 🙋 When we read about how he grappled with the worst news imaginable (or so he thought), we can see the kind of person God uses.

Question: What is up with this prophecy? Did it look like God missed it for 2,000 years? How would you know this was a much bigger prophecy than what was needed at the time? How did the first century Jew understand prophecy and fulfillment?

What Are the Characteristics of a Person Does God Uses???

1- God uses someone who is willing to follow God’s ways. 👍

Following God’s ways is not always easy. God’s Word is difficult because it challenges the status quo. It challenges our desire to be selfish. It challenges our desire to go our own way. However, God loves us more than we can imagine. Everything written in God’s Word is for our benefit, not His. He gets no glory in making our lives difficult. He gets glory in us living for Him and being in close fellowship with Him. Therefore, following His ways are extremely important because He knows the road to freedom. We have never been this way before. We have never grappled with this stage of life. We have never had to deal with these things. However, the Creator of all things has a road map to freedom.

2- God uses someone who is willing to slow down and listen. 🐌

We live in such a fast-paced life. Every generation has said that but it really does seem to be the case for us. Joseph took his time in making this massive decision. God uses people who are willing to slow down and seek Him for wisdom. I have learned in my own life that God is never in a hurry. He will wait until we have exhausted ourselves and are so tired we finally sit down and quieten ourselves. It is in those moments where He softly speaks, “I’ve been waiting for you.” I can only imagine how many mistakes I have made because I rushed into a decision rather than waiting on Him. Also, how many times did I needlessly grapple with a decision all alone because I was unwilling to wait in His presence and experience His peace? God is willing to wait for us to come to the end of ourselves so we can find Him.

3- God uses someone who is willing to value God’s Word over public opinion. 🤷

There is something obvious and not so obvious about this one. During the time of our text, the jewish nation was under the control of the Roman Empire. Most of us are not familiar with having military overlords who can seriously persecute us and our culture. However, many of us HAVE faced criticism for one reason or another. In these moments, it is relatively ‘easy’ to stand against others who draw clearly defined lines in the sand which go against our convictions. In our culture today, we can easily stand against things we perceive as clearly wrong. Example: Late-term abortion, genocide, human trafficking, etc. BUT… what about the “fuzzies?” What about those areas that are not so clearly defined?  For example: The Bible does not saying that having an alcoholic beverage with your dinner is a sin. Jesus turned water into a whole bunch of wine so a wedding party could continue! However, the Bible does speak clearly about us not becoming drunk and overindulging. What do you do in this situation when you decide to honor God’s Word and your brothers/sisters in Christ want to divide from you because you are a “stick in the mud?” What about shows like “Game of Thrones?” I have talked with many Christians who LOVE that show and talk about it often. However, the show promotes many things that you would not want to show on a Sunday in church. This would include the extreme violence and nudity in almost every episode. What do you do when you decide that you don’t want to watch something that you would not watch if Jesus was physically in the room and others say you are being legalistic? God’s Word and public opinion will often be in conflict. The biggest dividing line is WHY you are doing something and IF you are pushing it on others. The “why” should be because you want to be as close to God as possible and never grieve His Spirit. The “if” should be a “never.” I never want to push my ‘fuzzies’ on you. If you do or don't do something because I say so, there is no power there to set you free. If you do or don't do something out of your love for God, there is freedom there.

4- God uses someone who is willing to choose faithfulness over convenience. 😳

We live in a culture that is so impatient. (as stated above) They say the average adult attention span is down from 25 minutes to something closer to 8 minutes. We can blame any number of things for the reason why and that is a great conversation to have. However, the most important conversation is what to do. I think the bigger conversation is the need to be seen, to be noticed, and thought of as one-of-a-kind. At some point, many of us have forgotten that movies are not real. We see these epic adventures where the hero saves the whole world in under 2 hours and we long to do the same. With the advent of the Marvel Cinematic Universe we see our heroes not only saving the world but the whole Universe! That can make our everyday lives seem lackluster. Think of Joseph. God had a great plan for his life. He needed Joe… to marry Mary and go to work every day in order to care, provide, and raise this baby. I woner if he said, "and then what, God." God would have said, "Keep doing that." That requires an enormous amount of faithfulness. It might have been easy for the first few months but eventually… can there be more? Sure, you can do it again tomorrow. Ugh. But, I wanted something important. What could be more important than being faithful in what God has called you to do? Maybe that is us sometimes. We can grow bored in the every day life. However, it is in every day faithfulness that we see the glory of God slowly revealed. God is painting the picture of His thumb-print on the hearts of each and every person we are in daily contact with. What could be more amazing than watching God paint His masterpiece and use us as an occasional brush!

Because of Jesus, I can be part of God's plan.