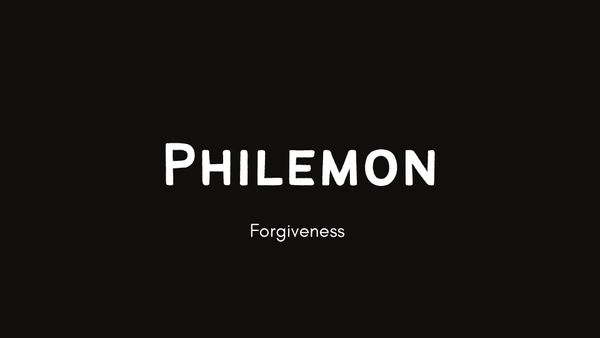 Paul lives in a world where slavery is a common thing. If you live in the United States, your view of slavery is fixed on the antebellum south and the TERRIBLE atrocities committed during that timeframe. Here are some things you may not be aware of about slavery.

This is not to condone or support slavery AT ALL. It is simply to say that, if you live in the United States, the book of Philemon is easy to misunderstand. Paul is asking a good man to accept his slave back rather than free him. Paul is asking a lot because Philemon was well within his rights to put Onesimus to death. Paul, instead, asks Philemon to see Onesimus as a brother. This is powerful and would have been controversial.

According to church legend, Philemon not only forgave Onesimus, he also set him free. Onesimus would eventually leave Colosse and move to Ephesus. It is thought he may have been the Onesimus who succeeded Timothy as the bishop of Ephesus.

Who wrote it: The Apostle Paul
Martyred: Killed by Nero between 62 and 64 A.D. He beheaded. There were many more gruesome ways to die so this was considered a merciful death for a Roman citizen.

Who is the original audience: Philemon. Church leader in the church of Colosse.

Where are we: Paul is in prison in Rome.

When was it written: 60-61 A.D. This letter was written the same time as Ephesians and Colossians.

What is the big idea: Paul's message to Philemon is simple. You have the right to seek vengeances, but the opportunities to offer forgiveness. This is a powerful idea because, at some point, we will all be faced with the same delimma. Paul requests Philemon choose forgiveness and charge anything Onesimus owes to Paul's relational account.

Why is this book important: This book is important because Paul is seeking for Philemon to do the hardest thing we face in any time and any culture... forgiveness. Forgiveness is often hard becauase it feels like we are being treated unfairly. We feel someone deserves to pay for what they have done. We feel the person who has wronged us will get away with someone if we do not hold them accountable. Forgiveness is not 'letting someone off the hook' or not allowing justice to take its course. Forgiveness is simply leaving judgement to God. Paul encourages us all to see our offender as someone who has been made in the image of God and someone who deserve the opportunity of forgiveness. This is even more for those who are brothers and sisters in Christ.

How can I apply it?: Within the first hour of your birth, you have been allowed to be offended. Some slights are small and some have reshaped your entire life. The question is not IF you will experience offense, but WHEN and WHAT you will do about it. It is normal and expected to retaliate and seek revenge. Paul offers us a controversial alternative... forgive. This is not easy, but it possible. Do you have someone to forgive? What will your first step be?

Chapter 1
This is an amazing story. Philemon is a slave holder and his former slave Onesimus had ran away to Paul and became a Christian. Paul has sent him back with this letter. This is powerful because what Paul is doing is restoring what was broken but also appealing to the slave holder to no longer treat him as a slave but as a brother. Don’t forget that there were many different reasons why people were in this position. It was not like the horrors of the pre-civil war South in America. Many times slavery was a temporary thing in order to pay a debt or as a chance to provide for someone’s family. Many times it was more like getting a job. Instead of working for a company, you worked for a family and they paid a wage.